Climate change is a global phenomenon with wide-ranging and potentially disastrous effects for the entire human population.  The consumption of fossil fuels (e.g. coal, oil, and gas) combined with mass deforestation has led to exorbitantly high atmospheric CO2 levels that were only last recorded 800,000 years ago. These high CO2 levels have resulted in a significant increase in the average global temperature, a key factor that has led to the polar ice caps melting at an accelerated pace, making the seas warmer and sea levels higher.1

Heat waves are much stronger than they used to be, record-breaking hurricanes occur much more frequently than before, and we’ve lost nearly 60% of the world’s wildlife.2 It’s been well-documented that these changes are a result of human activities, as worldwide economic and technological progress has led to a consistent increase in the amount of CO2 in the atmosphere. Altogether, this has led to a rise in the average global temperature of nearly one degree Celsius since 1901, with the rate of global warming having doubled since 1975.3 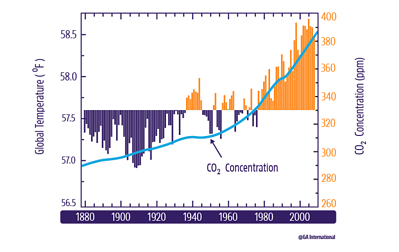 Acting to reverse the course of climate change has been a slow process. In 2015, countries belonging to the United Nations signed the Paris Agreement, a pledge from the heads of each country to limit carbon emissions with the goal of keeping global temperatures from rising by no more than 2 degrees before the end of the century. Ultimately,  the aim is to keep it at or below 1.5 degrees higher than the current temperature.4 However, the agreement hit a snag as one of the leading consumers of fossil fuels, the United States, decided to walk away from it. One of the major hurdles to implementing effective climate change policies is promoting awareness, an especially important task considering the large number of people who deny the existence of climate change.5

To raise awareness, many international organizations, like UNESCO and the World Health Organization (WHO), have developed programs to promote climate change science and affect governmental policies on curbing CO2 emissions.6,7 In 2015, the non-profit climate change advocacy group, Our Horizon, decided to petition the Canadian government to affix warning labels to gas station pumps, similar to what has been done with cartons of cigarettes. North Vancouver was the first to take up the initiative, putting labels on their gas pumps with a picture of a reindeer along with text that read “Warning: Use of this fuel product contributes to climate change which may put up to 30% of species at likely risk of extinction.”8 Our Horizon has also partnered up with the California-based group, Think Beyond the Pump, to help bring climate change awareness to the United States.9

Internationally, two Scandinavian countries are following Canada’s lead with initiatives to label gas pumps as well as food products. In Sweden, all gas pumps will require labeling with climate change awareness stickers by 2020 to go along with other emissions-cutting policies like building more charge stations for electric cars and increasing the use of biofuels.10 Denmark is now considering putting labels on all food products, that detail the item’s impact on the environment. This is an important step in promoting awareness because agriculture plays a sizeable role in climate change, with livestock representing 14.5% of global CO2 emissions.11 The idea to label food is supported by the Intergovernmental Panel on Climate Change (IPCC), which views the labels as a way to not only promote consumer awareness but also to help farmers be mindful of how efficient their practices are and to develop ways of growing produce in more eco-friendly ways.12

Fighting climate change requires rethinking the way we, as a global society, choose to live. Raising awareness is one of the ways that might push people to become more environmentally cautious. If each person reduced their daily CO2 emissions only a small fraction, the result would be a significant step towards negating the speed and impact of greenhouse gas buildup. It might also drive participation in local, national, and international politics, pushing politicians to enact climate change–friendly policies that wouldn’t just benefit their individual constituencies, but the rest of the world as well.

Alexander Goldberg, Ph.D.
The scientific writer and social media manager at GA International. Dr. Alex Goldberg earned his Ph.D. in biology and previously worked as a post-doc in toxicology and medicine, studying chronological lifespan in yeast, anti-neoplastic small molecules, and the genetics of tuberous sclerosis complex.

Many labs prioritize sample tracking; after all, most labs focus on generating mass quantities of samples, each of which requires a unique label that...
Read more
Biotechnology

LabTAG is the worldwide leader in cryogenic and chemical-resistant label manufacturing. With over 20 years of experience in the industry, and a catalog of 6000+ products, we have the selection and know-how to meet your labeling needs.

Cell culture is an invaluable tool in biology, drug discovery, cancer research, as well as in the study of stem cells. Currently, most labs...
Read more

This week’s Research Spotlight focuses on Luke Mansfield, a Ph.D. candidate from the Oncology and Metabolism Department of the University of Sheffield. His research...
Read more

Many labs prioritize sample tracking; after all, most labs focus on generating mass quantities of samples, each of which requires a unique label that...
Read more
Load more