How Vaccines are Made

The main purpose of any vaccine is to stop the spread of communicable diseases from one person to another and, where possible, to abolish the disease outright from the general population. There are many commercially available vaccines for a variety of viral and bacterial diseases, including diphtheria, tetanus, whooping cough, measles, polio, tuberculosis, hepatitis, human papillomavirus, and influenza. A lot of work goes into how vaccines are made, though three things are required: research to find an antigen (usually a protein produced by the pathogen) that produces a protective immune response against the disease, a platform in which to produce the vaccine, and clinical testing.

To formulate a vaccine, an antigen must first be identified that stimulates a protective immune response in the host against the pathogen. The classical method of doing this is by simply taking whole organisms, either live or dead, as the source of the antigen and mimicking the natural infection. If a live organism is used, it is often altered, or “attenuated,” so that it is much less infectious but still induces a similar response compared with the original organism. However, using whole organisms as the source of antigens makes vaccine production and quality control logistically demanding to keep consistent.1 Using live attenuated vaccines may also be more likely to actually cause the disease they should be immunizing against.2

“Reverse vaccinology” is now more frequently used to identify potential antigens of interest for vaccine development.3 This involves using genomics and proteomics to find genes and proteins that can be used as antigens. Comparative genomics can be used to find antigens that are broadly expressed across different strains of the same species, which is useful when trying to formulate broadly protective vaccines. Bioinformatics and structural biology are also crucial, as immunological prediction software can help map specific regions of the viral or bacterial antigens and predict which ones will have better immune responses. These regions, or epitopes, can then be tested on the host’s immune system, where assessments are performed on immune cells, such as B cells and T cells, to measure their state, function, gene expression profiles, and the cellular signaling pathways that are activated.4

Another consideration with regards to antigen selection is the use of adjuvants. For antigens that elicit weak responses, an adjuvant can be added that will enhance immunity to the antigen, boosting the immune response and making the vaccine more effective. They can also be included in the formulation so that it requires a lower dose of the vaccine, which helps overcome limitations with vaccine production.3

Adapting the right platform to produce the vaccine 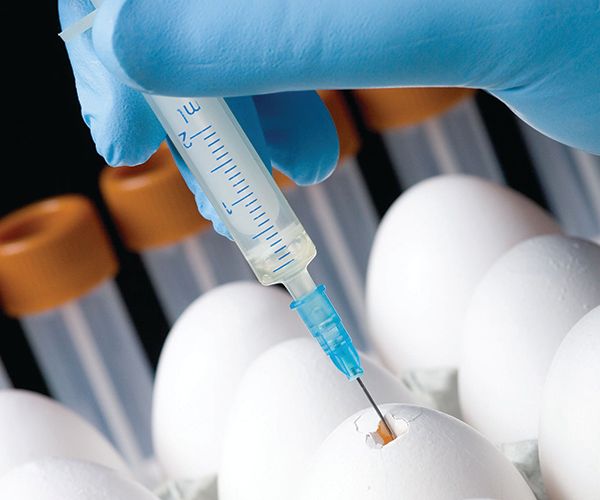 The oldest platform for vaccine production is egg-based. Since the 1940s, hens’ eggs have been used as incubators for live viral particles, which could be pooled, purified, and, when necessary, inactivated. The vaccine could then be formulated and packaged. Unfortunately, production using this kind of platform is limited since it depends on egg availability and can often lead to adverse reactions in those with egg allergies. As a result, manufacturers began using cell-based platforms for vaccine development. This type of production uses mammalian cell cultures to propagate viruses, which can be isolated and purified from large batches of cultured cells. This method also suffers from several drawbacks, including high costs, slow cellular growth and/or proliferation rates, and high risk of bacterial contamination.2

Many of the newer methods of producing vaccines utilize recombinant technology that combines the genetic material of the virus with that of other viral-like particles (VLPs) or plasmids, which can be propagated in a variety of ways.4,5 Some of the more cost-effective platforms that allow production to be scaled up include:2

Humanized yeast – A VLP is used to produce the antigen of interest in yeast cells. However, because the antigen is synthesized in yeast cells, it isn’t always properly modified. Therefore, the yeast used to make vaccines need to be humanized by genetically manipulating how it modifies proteins inside the cell.

Insect cells – Baculoviruses, which are DNA-based insect viruses, can be modified to express the antigen of interest. The baculovirus is first engineered in bacterial cells, like E. coli, then transfected into insect cell lines. Similar to yeast, these cells need to be engineered to modify proteins like human cells would. They can be used to generate industrial amounts of vaccine, though, and the baculoviruses used in this platform represent zero risks to human health. This system can also be adapted to generate a wide range of vaccines simultaneously using VLP-based multiprotein expression platforms, such as Multi-Bac and ADDomer.

Bacterial OMVs – Bacteria that produce outer membrane vesicles (OMVs)—small membrane-bound vesicles that are secreted by bacteria to communicate with other cells—are genetically engineered to synthesize antigens, which become ensnared by OMVs that are then isolated to formulate the vaccine. These bacteria can also be reprogrammed to produce large amounts of OMVs and to reduce their toxicity.

DNA and RNA vaccines – The vaccine is encoded by DNA or RNA particles, which are injected into the subject to produce the vaccine. This avoids having to humanize the platform as the antigen will have the proper protein modifications since it’s being produced in the host itself. For RNA vaccines, the preferred type of vaccine is a self-replicating RNA particle as it’s relatively easy to deliver and relatively effective.

Edible plant vaccines – Companies like Medicago specialize in designing plant vaccines that can be ingested without isolating the antigen or re-formulating it. Here, a plasmid containing the gene(s) of interest is taken up by the plant with the help of Agrobacterium tumefaciens and is propagated as the plant grows and reproduces. The plant can then be eaten, with the antigen protected from gastric secretions by the outer wall of the plant. The antigen can then be delivered to the intestines, where it’s absorbed and causes an immune response. The seeds of the plant can also be easily distributed worldwide.5

Not all these platforms have generated licensed vaccines yet. Instead, they represent cost-effective strategies for developing new ones, potentially yielding solutions for those in low-income countries to obtain immunization against harmful pathogens.2 It’s also worth noting that there’s no perfect vaccine platform for every disease, as some companies, like GlaxoSmithKline and Sanofi, have portfolios of vaccines that include products formulated using different platforms, depending on the pathogen it reacts against.

In the United States, once a vaccine has met all the necessary goals in its initial stage of development, an Investigation New Drug (IND) application is sent to the US Food and Drug Administration (FDA), which is needed for clinical testing. If granted, the vaccine still requires at least three phases of clinical trials. Phase I involves using a small cohort of patients, usually around 20 to 80 people, and determining the vaccine’s safety and the extent of the immune response it generates. If the vaccine is intended for children, the researchers will first test adults, then gradually step down the age of the test subjects. If it passes Phase I, it moves on to Phase II, which involves a cohort of hundreds of subjects, some of whom may be at risk of getting the disease in question. Finally, Phase III trials involve thousands to tens of thousands of subjects and assess both the efficacy and safety of the vaccine. These large-scale studies are usually randomized, tested against a placebo, and blinded so that the subjects don’t know what treatment they’re receiving. Varying vaccine labels should also be used at each phase, to indicate the dose requirements, and proper administration procedures. If the vaccine performs well throughout all three phases of testing, the vaccine manufacturer will then submit a Biologic License Application to the FDA and, following inspection of its operations by the FDA, will ultimately gain approval to sell the product.6

Once the vaccine is approved, testing doesn’t stop there. Many vaccines enter Phase IV trials, which study their effects in real-world situations. Vaccine manufacturers also need to maintain high production standards as they synthesize new batches of product, continuously providing documentation related to Current Good Manufacturing Processes (cGMP) to the FDA or any other regulatory authority.7 As another measure of safety, there is also the Vaccine Adverse Event Reporting System (VAERS), which was established in 1990 by the Center for Disease Control and Prevention (CDC) and the FDA. VAERS collects information on adverse events possibly related to the administration of vaccines in order to detect previously unknown adverse effects, monitor known adverse effects, identify potential risk factors, identify specific lots that are associated with increased adverse events, and assess the safety of new vaccines. Another database established by the CDC, the Vaccine Safety Datalink (VSD), helps share information between large medical groups regarding vaccine safety and efficacy.6

Vaccination is one of the most cost-effective ways to manage infectious diseases worldwide. Many countries rely on companies to supply enough vaccines for routine immunization programs to keep the population healthy.7 The benefits for low- and middle-income countries far outweigh the costs, yielding a return on investments of up to $44 for every $1 spent.3 However, vaccine production is challenging because it must be kept consistent, from the process itself to the raw materials used, with small changes resulting in altered purity, safety profiles, and effectiveness.7 Delivery can also pose a challenge, with some vaccines requiring cold storage for safe distribution. This necessitates the implementation of a sustainable cold chain, with freezers, insulated containers, temperature data loggers, and vaccine refrigerator labels. It also costs huge amounts of money and resources to develop a single vaccine; from concept to market, expenses can be as high as $500 million over the span of 5 to 18 years.2 Therefore, as the demand for vaccines grows, so too does the innovation to design and formulate them, allowing manufacturers to keep costs low in order to scale up production and provide high-quality products to those that need them most.

Alexander Goldberg, Ph.D.
The scientific writer and social media manager at GA International. Dr. Alex Goldberg earned his Ph.D. in biology and previously worked as a post-doc in toxicology and medicine, studying chronological lifespan in yeast, anti-neoplastic small molecules, and the genetics of tuberous sclerosis complex.

Cell culture is an invaluable tool in biology, drug discovery, cancer research, as well as in the study of stem cells. Currently, most labs...
Read more
Biotechnology

The study of adhesion is essential in the identification industry; this type of research has led to the development of specialized labels that utilize...
Read more
Biotechnology

Blockchain has emerged as a promising and disruptive technology thanks to its potential to offer verifiable, permanent, and decentralized data handling. While usually associated...
Read more

LabTAG is the worldwide leader in cryogenic and chemical-resistant label manufacturing. With over 20 years of experience in the industry, and a catalog of 6000+ products, we have the selection and know-how to meet your labeling needs.

Cell culture is an invaluable tool in biology, drug discovery, cancer research, as well as in the study of stem cells. Currently, most labs...
Read more

This week’s Research Spotlight focuses on Luke Mansfield, a Ph.D. candidate from the Oncology and Metabolism Department of the University of Sheffield. His research...
Read more

Many labs prioritize sample tracking; after all, most labs focus on generating mass quantities of samples, each of which requires a unique label that...
Read more
Load more